I met Nicolas in a shed in a thunderstorm. Eating a deconstructed nectarine and nursing a chronic hangover following a raucous night at a Hungarian campsite, I welcomed him off the road and into the dry with one of those phrases that you can use while cycle touring that has no real parallel in everyday life: “Gosh, my shack is popular today.” 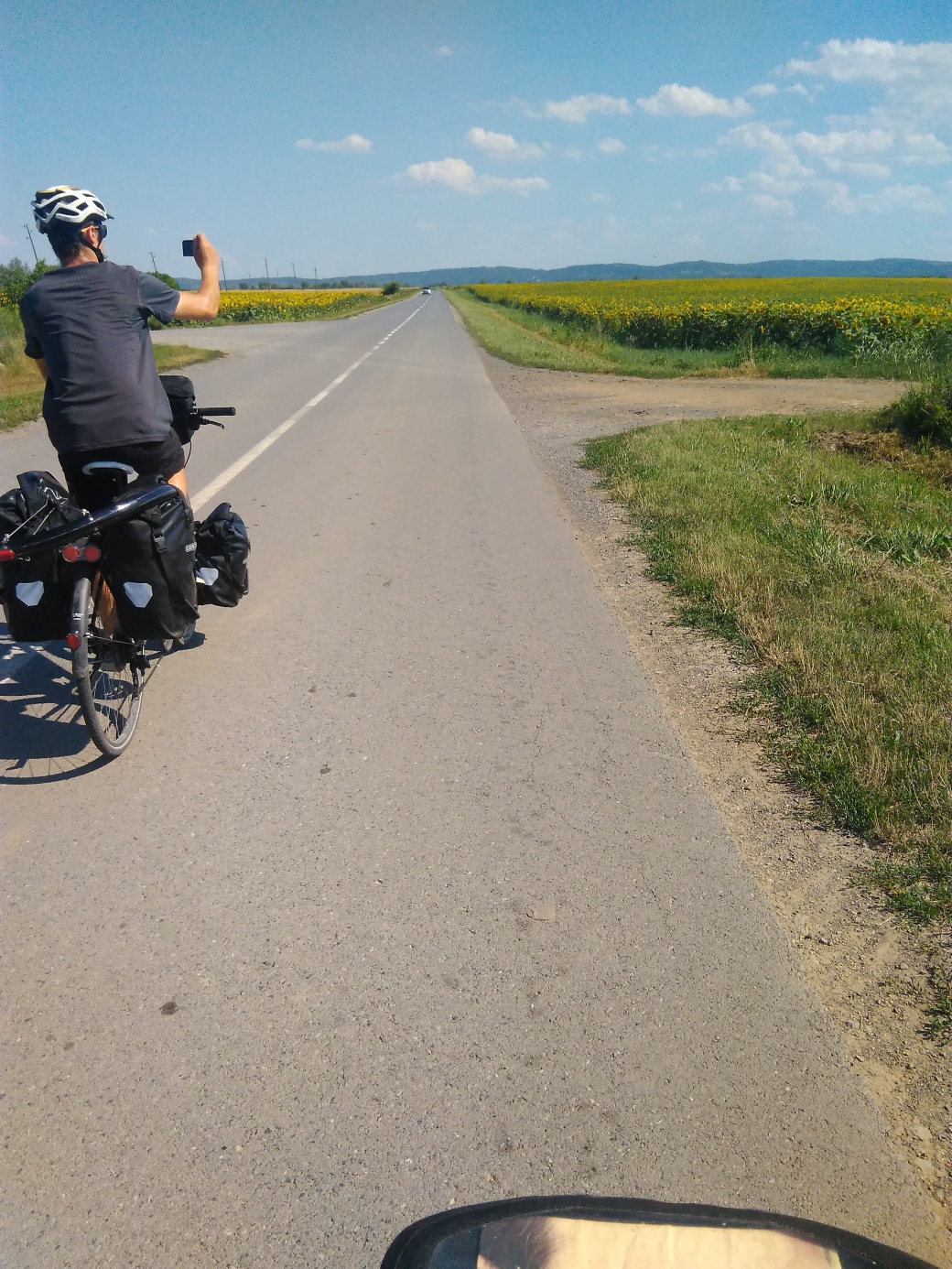 Since then – just over a week ago – we have ridden more than 700km together. When I say together I mean with me about 10 metres behind and complaining loudly, largely because I grossly exaggerated my daily mileage at our first encounter. There are a series of stock questions that cycle tourists ask one another on the road: where you come from, where you are going, and how many km you ride per day. Usually you can get away with rounding up the last number, as I did, looking thoughtfully across the Danube and saying with false modesty: “about 80km”, without qualifying that this downhill with the wind behind me. 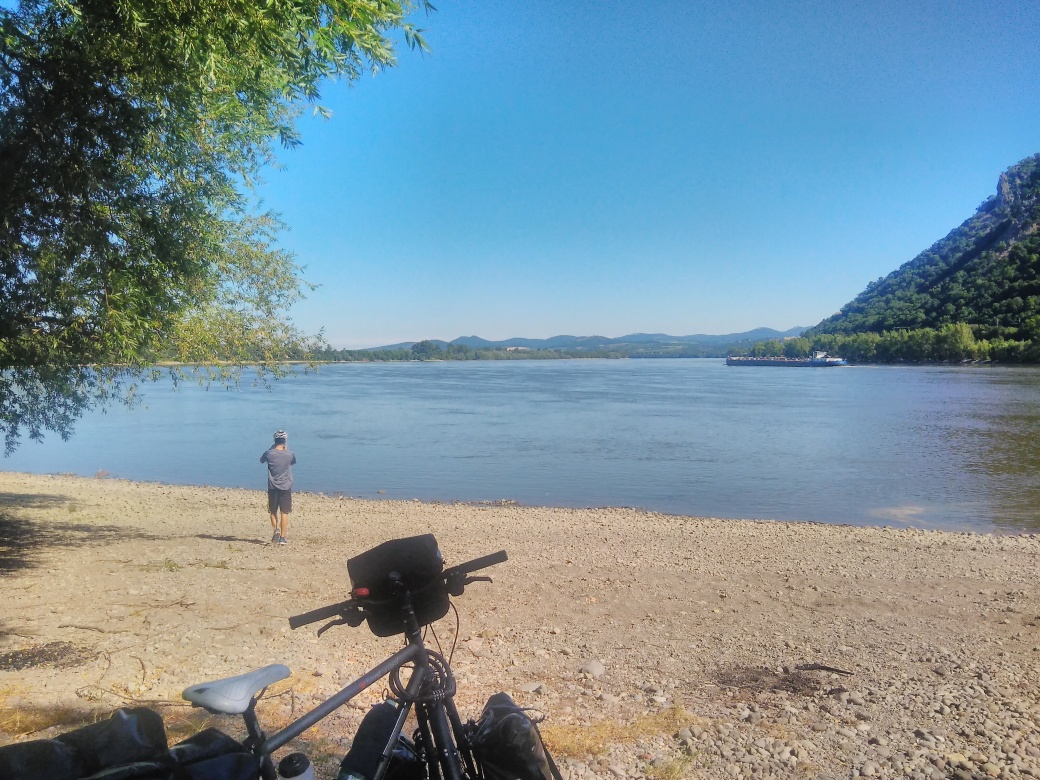 But you are caught out in this exaggeration when the other cyclist asks if you want to ride along with them for a bit. Nicolas, a young Belgian who has ridden to Hungary from Mons, and I are both heading along the Danube to Romania, where he will ride on to the Black Sea and I will head south for Istanbul; we were both riding alone; we supposedly covered the same daily mileage. It seemed like an ideal partnership. Except that it turned out that where I had rounded up my mileage, Nicolas had rounded down. 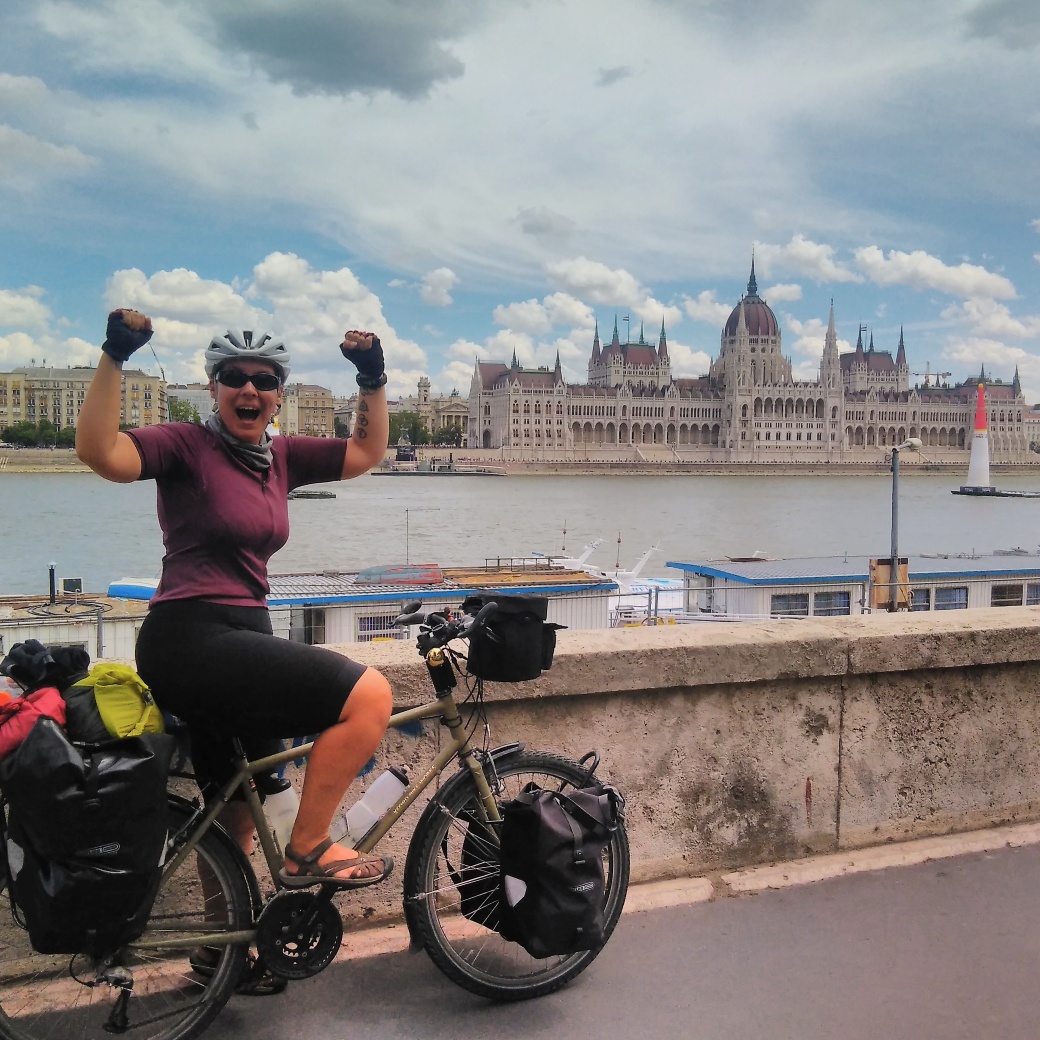 So it was that I found myself in Budapest utterly knackered and a day early for my scheduled rendezvous with Mum and my sister. I set up at the city’s only central campsite, where an American veteran stands on my tent to stop it blowing away ahead of me to Croatia while I pitch in a strong wind. Over a beer I find out that he is over 70 – he is delighted to discover he can travel for free on the Budapest metro – and cycling solo to Istanbul, where he will fly on to India, cycle to Nepal and on through south east Asia. It is his first cycle tour. “It began with a glass of Bordeaux,” he explains, to which I feel like saying, don’t all good things. He had planned a ride through the vineyards of France with friends, all of whom dropped out, leaving him alone. The journey has, I point out, escalated rather, and he agrees. He’d wanted to go adventuring in his retirement and wondered about sailing but his boat sank during a recent trip around the Caribbean islands. “It didn’t sink until I was aboard the Japanese fishing vessel,” he assures me, adding that he was surprised the previously un-referenced Japanese shipping vessel was there at all as he had lackadaisically decided not to send a distress signal when the rudder snapped. Aboard the freighter, he tells me, he encountered so many cockroaches that he could write a thesis about their sociology.

Budapest is a grand old city whose two historical fronts – Buda and Pest – square off against each other over the wide Danube. It has many great cultural hotspots. But if you are there for just a few days, I beg you, prioritise a trip to the Labyrinth in the old city. As Mum, Julia and I descended away from street level into the blissful cool we laughed at the signs promising it was “the ninth most popular tourist destination in Europe”. Really, it deserves to be the first. You can keep your Notre Dame, your Colosseum, your Big Ben and your Acropolis. The Labyrinth in Budapest is a gothic masterpiece that flies gleefully in the face of health and safety legislation: between caverns of incongruous waxworks depicting scenes from (I think?) Verdi operas are long – 1km – walks through pitch black, unlit caves, where you cling to wall-mounted rope for guidance.
I go through twice – once with the hazy half-light of my sister’s smartphone illuminating our steps, because she thinks this is a generally stupid idea, and once completely alone, just to see if I can do it. I lose my family on the other side and turn right into the most extraordinary Dracula-themed series of caverns, where the stage smoke is so thick the light can’t penetrate it so you crash into open coffins housing speakers that play children’s laughter on loop. It is absolutely some of the most fun I have ever had. I will qualify that Julia did not feel the same way, although I am contractually obliged to say that this is because she was cold not because she was scared. Afterwards in the sunny castle square she said to me and mum: “If you liked it that much we can go back to the apartment and I’ll turn all the lights out and you can knock yourselves out. Literally.”

I meet Nicolas again in Budapest when he and I and my family go for drinks with Tim, Ana Maria and their daughter Brooke, an American family who have invited us over following a chance encounter in Budapest’s main square. As we ascend in the elevator to their gorgeous flat I affect a practised ease to suggest to my family that this is a fairly standard part of life on the road, but a second glance at my and Nicolas’ wide, delighted eyes when we see the wine, the spread of beautiful food they have laid on would have given the game away. It was one of our luckiest encounters: we were standing, dazed by the noise of Budapest, which had welcomed us in from the countryside with the screaming engines of the Red Bull airshow as planes swept under the Chain Bridge, when Tim and Ana Maria approached us to welcome us to the city. One of the few benefits of being permanently attached to a giant rig loaded with all of your possessions is that you are easily identified as a cycling fanatic by other cycling fanatics.

A few days later it is harder than ever to say goodbye to Mum and Julia because we haven’t scheduled any other meet-ups, and 15 more months on the road suddenly feels like an awfully long time. So I am relieved when Nicolas sends a message to propose that we cycle out of Budapest together. I am thinking of mum in the taxi and remembering how choked up we got saying goodbye, watching aeroplanes flying over the city and wondering if they are onboard, when I see Nicolas standing, waiting, in the main square, where we first arrived in the city, his bike loaded up like mine as if no time had passed. We hesitated before setting off, still adjusting to each other’s cycling pattern – who will go first? who will navigate? – then I stand on my pedals, crank down, and say: “Let’s go to Istanbul.”

There was an error retrieving images from Instagram. An attempt will be remade in a few minutes.