My way into Germany, aboard a ferry across the river Lek, was paid by a Dutch cyclist called Hans (“it is a German name, but also a Dutch name; I am preparing you for Germany!”) who exuded such serenity, even at the realisation that I had exchanged a route map for a poster of Ewan McGregor, that I forgot all about my dealings with Dutch law enforcement. 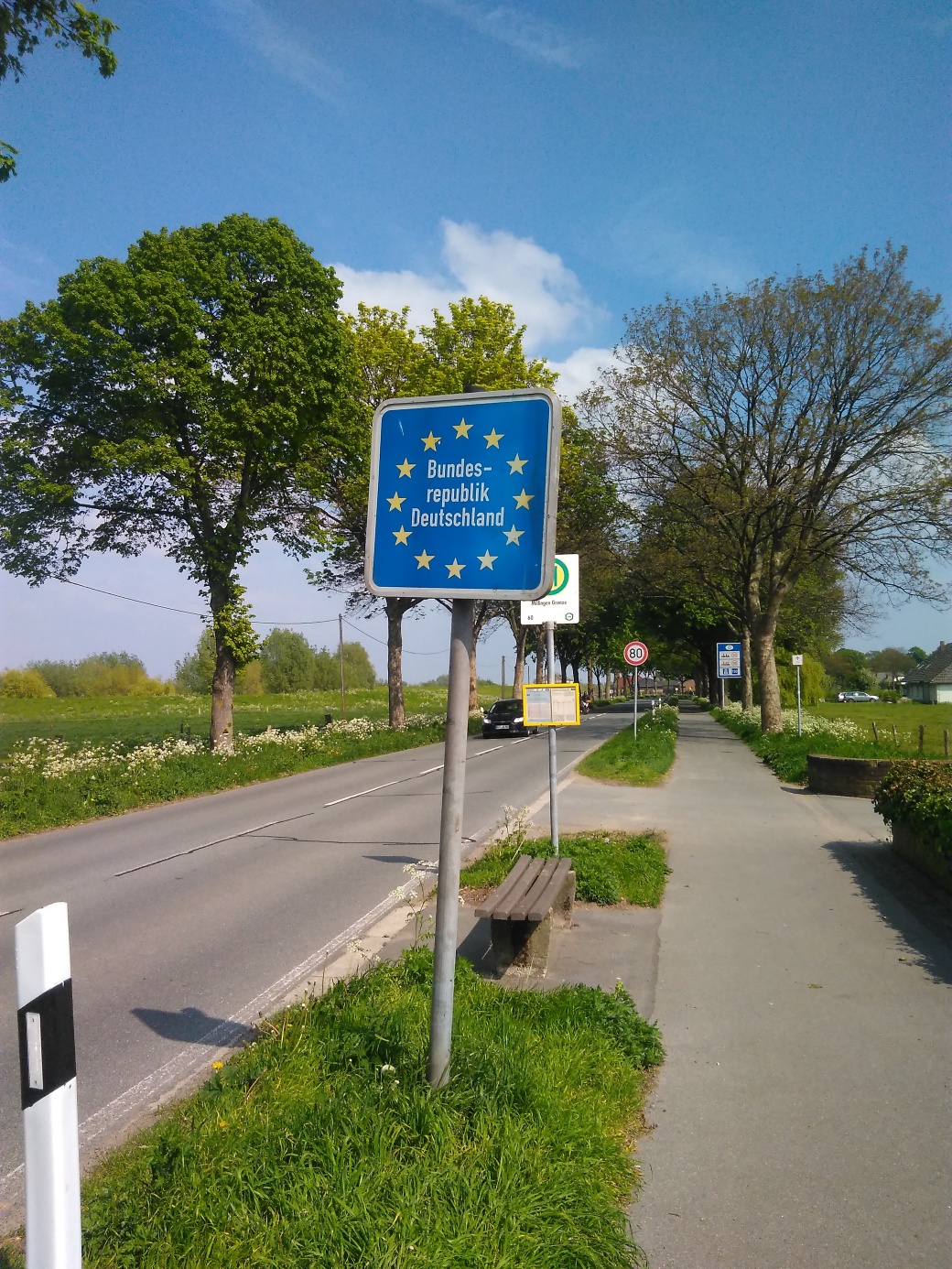 The unmanned border crossing at Millingen lacked any ceremony whatsoever – I didn’t even have to get my passport out – so it was with Hans’ parting words as we separated at a crossroad – “on to Germany, and adventure!” – that I span into my third country, and straight into the nearest beer house. It was to be the last meal – well, chips – that I had in a restaurant (to-date).

My run in with the Dutch police had put me off wild camping, forcing me into the expensively regimented, caravan-shaped, arms of German campsites, a life of leaving electronic devices plugged into the shaver sockets of public toilets and night time bike rides to the shower block. At 14 Euro a night, it meant that my daily budget was now entirely devoted to securing myself the least offensive plot between two Winnebagos. So uninspiring was my first, official German campsite that I ditched my planned day off and smashed out a 90km ride deeper into Germany to reach a much lovelier, riverside site between Duisburg and Dusseldorf.

Never more than when I blew past Cologne the next day, as fast as I could knock groups of tourists into the Rhine, was I surprised at how little I wanted to explore the big towns along the river. A combination of forbidding suburbs and 50kg of bicycle accomplice meant that deliberately, but at the same time without having intended to, I missed out Dusseldof and its altbier; Bonn and its university; Cologne and its kolsch and its cathedral. 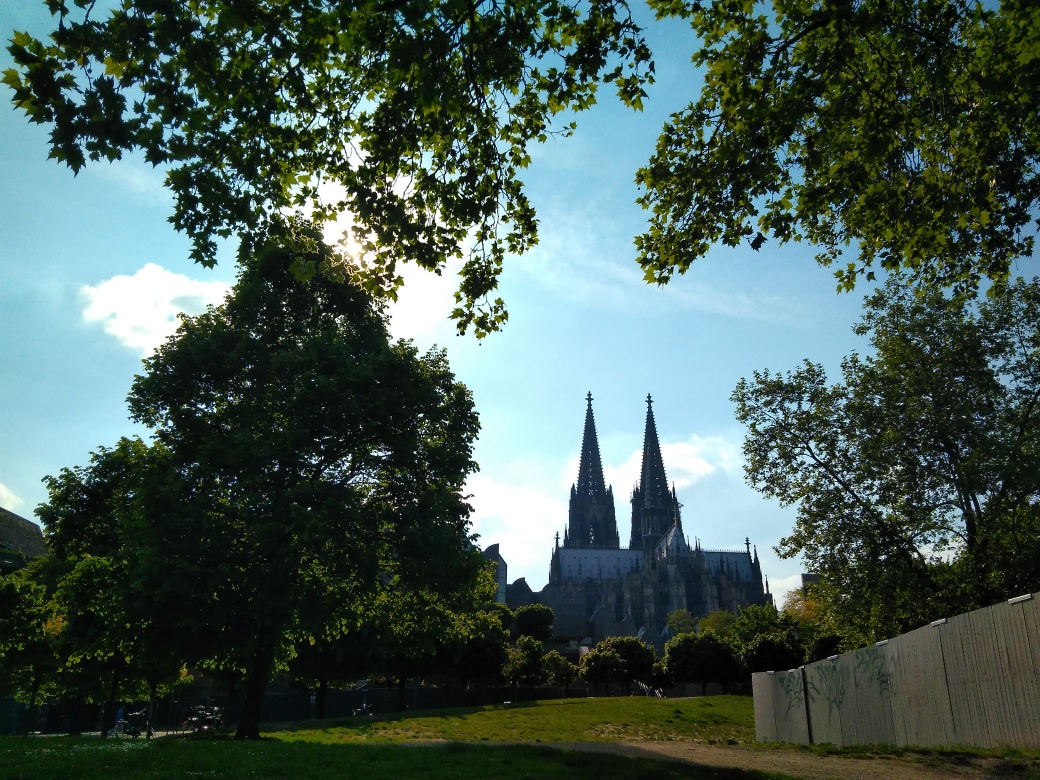 Sometimes I was forced into cities: cycle paths would inland around ports and harbours, leaving me at one point entirely flummoxed in the middle of the Ford plant. But it was a strange, cyclists’ aversion, shared by Stephanie, a cyclist I met in a campsite beyond Cologne, who was pulling her dog along behind her in a trailer on her ride from Germany to Norway and Sweden. A former au-pair, she had pulled the same dog in the same trailer across Canada, through the Rocky Mountains. While I fumbled with my Thermarest she gave her last Lidl muffins to a riverside jogger who complained he was about to collapse from hunger; she was gone early the next morning, before I woke, to miss the northbound traffic, but she had left a note duct taped to my tent pole.

Of all the contingency plans I had not bothered to make for this trip, being faster than anticipated was one of the most unlikely to ever have been necessary. And yet, as I studied my map the next day in a campsite near Konigswinter, I realised that I was due to arrive in Switzerland at least a week earlier than I had arranged to meet my sister and her boyfriend. So I charged with as little speed as I could muster into the Rhine Gorge at Koblenz, and the stretch of the Rhine that I had most been looking forward to.

The hills grew up and slumped away from the river, flattening into bright yellow fields of rapeseed at their summits, as I discovered when following the advice of a couple of mountain goat-like retirees from Yorkshire near the famed Lorelie rock.

They were introduced to me by Chris, victim of my first chance to have a long conversation in two weeks, who came from Worcester and owned the campervan next to my pitch near Lorelei, and who came over to offer me a camping chair when he saw me sitting in a ditch eating rye bread on the afternoon of my arrival. The three Brits had an encyclopedic knowledge of the region – there, on the opposite bank, was one of Hitler’s favourite amphitheatres; at the end of the river, three illuminated triangles indicated what kind of boat was about to drift in a death-defying skid around the strong current (I became, later, totally obsessed with monitoring the triangles). The couple – walkers from Ripon – had sent me off up a Palatine to the Maria Ruh, promising a panorama of the Rhine that I decided almost certainly wasn’t worth it when I had to stop for a lie down on a park bench half-way up the hillside. 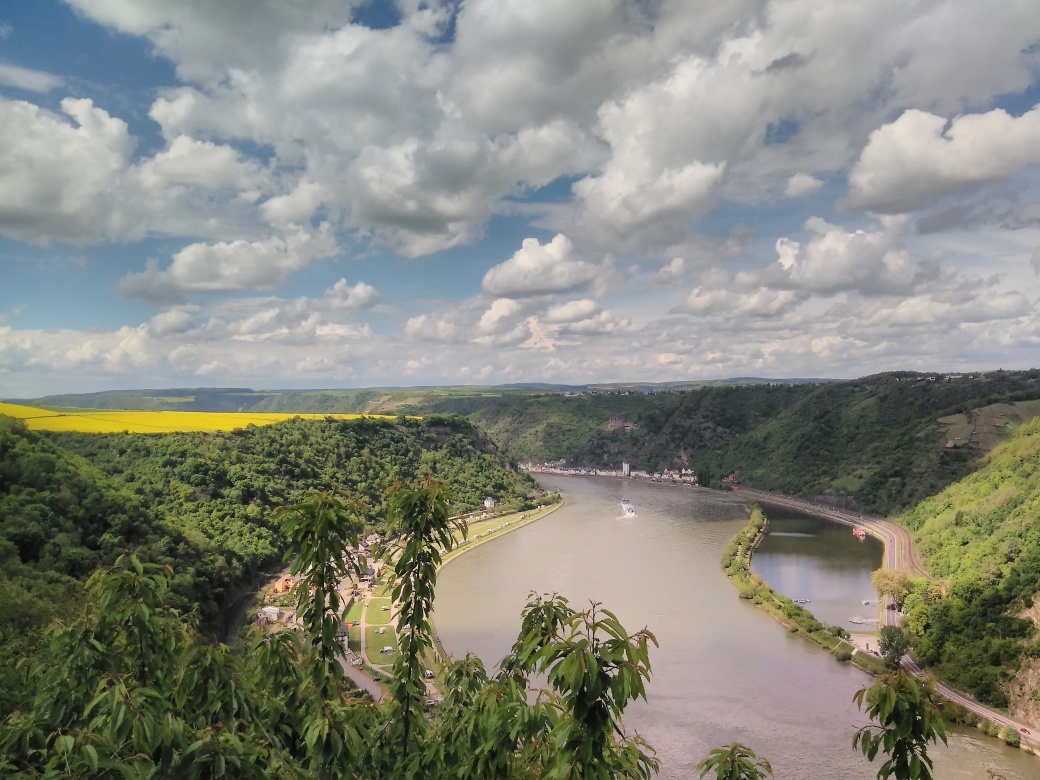 I awoke the next day halfway across Germany, a fortnight into my trip, and with a series of appointments for coffee to honour before I could leave the world’s friendliest campsite. The last of these – breakfast with a young German group whose caravan had parked alongside my tent in the night – ended with Lars, a German drummer, entreating me: “Don’t give up.”

I’d made a joke – self-deprecating, self-defensive – while giving his group my Twitter details, that they would be able to pinpoint the moment when I gave up and set up for good in Italy. “I won’t,” I said, “I feel like, if I’ve got this far, I’ll probably make it all the way.” Lars said: “In Germany, we have a phrase that means: today, think about today, then tomorrow think about tomorrow, then the next day, think about the next day.” Later, on my bike, when I realised that anxiety about the right motorway to ride into Istanbul and the length of time it would take to secure an Iranian visa had completely taken my focus away from the Gothic novel castles that sprang out of every hilltop spinney – the castles I’d ridden for a fortnight to see, I took it to heart, and thought only about the next 30km to Bingen, and the end of the Rhine Gorge.